What is Strategic Thinking?

Strategic Thinking is easy to say but much harder to achieve in reality. Understanding what strategic thinking is, and how it differs from operational thinking, is the first step in becoming an accomplished strategic thinker.

Strategic thinking is the process of thought that goes on inside the head of the CEO and the key people around him or her that helps them determine the “look” of the organisation at some point in the future. And that look, or composition, of the business in the future may be different than it is today.

Strategic thinking can be compared to picture painting. It is the process that helps the CEO and the management team “draw a picture” or “profile” of what they want the organisation to look like at some point in time. It is this “picture” or “profile” that will determine the direction, nature, and composition of the business. 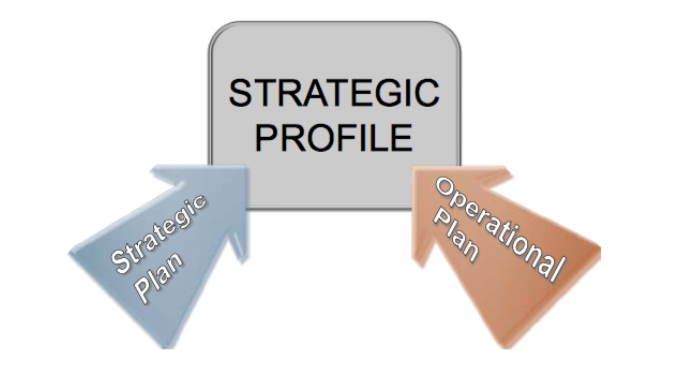 Strategic thinking, then, is the type of thinking that goes on within the mind of the CEO, and indeed the management, to shape and clarify the organisation’s future strategic profile. Decisions that “fit” within the parameters of this profile are taken and implemented, and decisions that do not “fit” rejected.

Operational planning, and even what has become known as strategic planning, is the type of thinking that helps us choose how to get there.

To illustrate the difference between the two types of thinking, we can develop a matrix with the “what” on the horizontal axis and the “how” on the vertical axis. 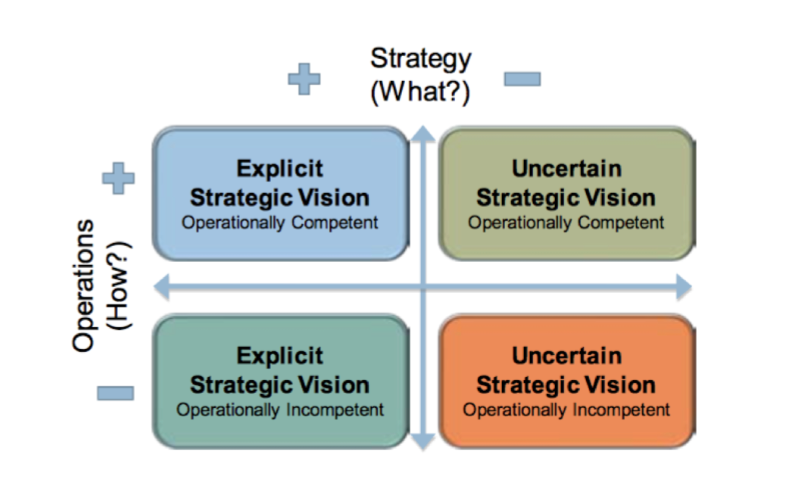 In quadrant A, we find companies that do both very well. They have developed a clear profile and explicit strategy, and they manage their business successfully on an ongoing basis. Companies that fall into Quadrant A include the likes of Apple. 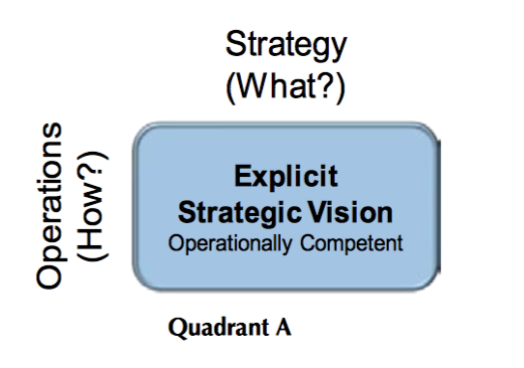 In quadrant B, we find companies that have been successful by managing their ongoing operations effectively, but which cannot articulate where they’re going. In other words, management can keep churning out good operational results quarter after quarter, but they do not have a shared vision of what the company will “look like” as a result of all that churning.

In quadrant C, we find the opposite situation. This is where many “copy cat” firms reside. For example, think back to the years when there were many firms competing in the nascent PC business. Each company probably had a very clear strategy: “Be the best IBM clone we can be.” However, many of these companies had great difficulty making this strategy occur; thus, their fortunes were up and down like yo-yos. Today, most of them are out of business! 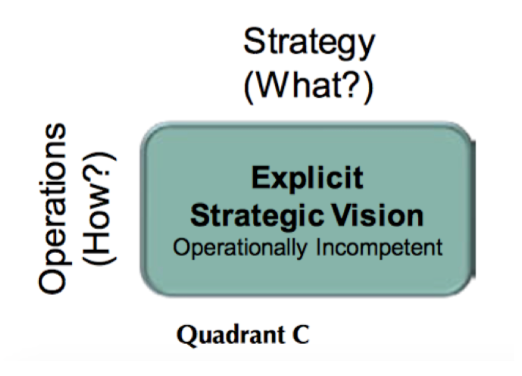 The last quadrant is the worst of both worlds. Here we find organisations that do operational and strategic thinking poorly. Companies that fall into quadrant D usually don’t survive very long. 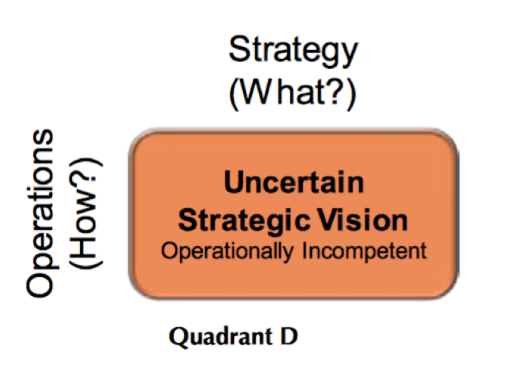 Which quadrant is your organisation in?

Although we would all like to say that we are in the A quadrant, most of our clients readily agree that they fell into B. That is, they are effective operationally but aren’t always sure what direction they are pursuing. As a matter of fact, our experience has shown that almost 70 to 80 percent of companies are in that position.

Surprising? Not really, when we explore some of the reasons for this. Here are two major explanations.

Firstly, most of the people who lead and manage organisations got there from the operational ranks. They were promoted from one level to the next because of their operational skills. They were good managers and made good operational decisions. They were able to “make the numbers”. They did not, however, spend much time thinking about, or charting, the direction of the company. As a result, they have not acquired the skill of setting direction and being the organisation’s strategic thinker. That skill takes time to develop.

Secondly, the need for management to think strategically does not arise all of the time. It tends to surface only at “strategic retreats” or when a new “strategic thrust” is being pursued, for example, when deliberating entry into market(s) that represent unfamiliar terrain. Often, the rules of the game are different requiring management to shake itself out of its operational thinking boots. However, if thinking strategically is not an on- going habit, one can hardly expect management to be proficient.

Let’s then return our attention to “Quadrant B” where 70% to 80% of organisations reside. These companies can be referred to as being part of the Christopher Columbus School of Management, the explorer who:

But he got there and back three times in seven years! Columbus was operationally competent but a very poor strategist!

To avoid being like Columbus a robust strategic thinking process is required. The process should guide and promote the type of thinking necessary as management attempts to determine what an organisation should “look” like in the future. Operational planning systems, on the other hand, can be used to later to help determine how to get there.

Strategic thinking is a fresh approach to the subject of strategy. It identifies the key factors that dictate the direction of an organisation, and it is a process that the organisation’s management uses to set direction and articulate their vision. For strategic thinking to be successful, it is necessary to obtain commitment of the organisation’s key executives and the commitment of others who will called upon the implement that vision. Naturally, the vision is greatly shaped by the CEO.

It is a process that extracts from the minds of people who run the business their best thinking about what is happening in the business, what is happening outside in the environment, and what should be the position of the business in view of those highly qualitative variables (opinions, judgments, and even feelings) – not the quantitative ones. Strategic thinking produces a vision, a profile, of what an organisation wants to become, which then helps management make vital choices. It enables management to put the corporation in a position of survival and prosperity within a changing environment.

What is Strategy Anyway?

How to get more from your online marketing. 4 Strategies.